Gun Sales on the Rise 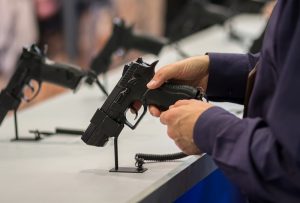 Data released by the Federal Bureau of Investigation (FBI) indicates that background checks related to the purchase of a gun increased by 41 percent between October 2015 and October 2016, according to a report published at NJ.com. Some observers connect the uptick in people starting the process of purchasing a gun to uncertainty having to do with the recent election, as many people believed that gun rights would have been threatened had Secretary Clinton prevailed.

All of these new gun owners in the state should be certain to take steps to ensure that they are in full compliance with the law. New Jersey has some of the strictest laws in the country regarding firearms, and people who are convicted of criminal offenses relate to the illegal use or passion of a firearm are often facing extremely serious consequences. Some of the penalties that may be imposed by a court after a gun crime conviction include the following:

Legal Defenses May be Available

Fortunately for people who have been accused of a crime related to firearms, there are often defenses that an attorney can raise. For example, if your case arose after a traffic stop resulted in a police officer finding a weapon, an attorney may be able to argue that the search was illegal. If it was, it may be possible to suppress the evidence discovered during the search, which can often force the prosecution to drop its case against you. Even in cases in which there are no defenses available, the representation of a lawyer may be able to result in a plea bargain arrangement that avoids the most serious consequences associated with the offense of which you are accused.

If you have been accused of the unlawful possession of firearms in New Jersey, you should speak to an attorney as soon as possible. New Jersey criminal defense attorney David Polsky has been representing the rights of criminal defendants in Northern New Jersey since 1995 and is committed to obtaining the best possible result in each case he handles. To schedule a free consultation with Mr. Polsky, call our office today at 973-686-9787 or contact us online.