Winter is Coming, It’s the Law to Clear Snow Off Of Your Car 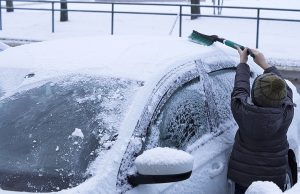 After a blizzard and you finally dig yourself out of the mountains of snow in your driveway, it can be tempting to simply rush out to wherever you are late to be. However, this may leave you still with a few solid inches of snow atop the roof of your car. Maybe it’s not even affecting visibility on the windshield but it is still dangerous for other motorists when it does slide off, especially if it’s on a 50 mile an hour highway. It’s also illegal, a little known and rarely enforced fact for New Jersey residents, but one that could still come back to bite you, especially if it ends up causing injury or property damage.

There are a bunch of complicated stipulations in the law when it comes to the technicality of what must be cleared off your car and from where before you put it on to the roadway, but this is not necessary to fully have a checklist to make sure that the snow it not on each specific surface. Just make sure that there is no snow or ice on your car before you drive it anywhere, and you should be good to go. This also applies to those cars being towed, as they will still be moving along the motorway and have the potential to spray snow all over the car or face of an unsuspecting passerby.

The most basic fines for this offense are not crippling—between $25 to $75 if you are just stopped for driving with snow on top of your car and it hasn’t actually flown off and hit anything yet. However, the penalties can get much more severe if you do actually cause any damages by recklessly endangering those around you by not properly clearing off your car before getting onto the roadway. If there is any property damage or injury as a result of snow or ice flying off your car, you can be fined between $200 and $1,000. If you’re driving a tractor trailer or other commercial vehicle, this grows even larger to $500 to $1,500, likely under the assumption that the employer will also be responsible for paying the fees.

There have been less than 5,000 tickets written for this law in the past six years it’s been in place, so it’s not very commonly enforced. However, one other thing you need to take into consideration is that if your snow or ice does fly off an injury someone, simply getting a ticket for not clearing the snow off your car is the least of your worries in that situation. Depending on the severity of the injury or property damage, you will almost certainly be sued by the injured party, and will face monetary damages if you have been found guilty initially of not clearing off the snow or ice. You will be liable for reckless endangerment, which carries with it a whole host of other penalties you don’t want to face.

If you are facing a charge of reckless endangerment or simply believe you have been unfairly charged with the failure to clear snow off of your car, I am here to help. Contact me, David W. Polsky, today for a free phone consultation about your case at 973-686-9787.